Race vehicles for the Sandblast Rally need to be registered and insured street-legal vehicles. I hadn't yet gone through that process for the KTM, and I had some concern that I might need to jump through some extra hoops since KTM originally only sold the 2009 505 XC-F as a off-road vehicle.

The bike was previously converted from an off-road vehicle to a street vehicle in Colorado, which means that it went through an inspection process and received a title and license plates like any other street-legal bike or car. However, I'm not in Colorado anymore; any vehicle coming into Kentucky from outside the state requires an inspection by the county sheriff's office.

Note that neither DOT-approved tires nor turn signals are required on motorcycles to be registered in the state of Kentucky.

I first took the bike to the inspector at my nearest county clerk's office. This is where I've done the paperwork for my other vehicles and it's generally been a painless process. Unfortunately, the inspector there was not really well-informed on the law or motorcycles in general and refused to inspect the bike since it was not equipped with turn signals.

The inspector was using an inspection checklist that was clearly written for cars, so I pointed out to him that no motorcycles are equipped with doors, which were also on his checklist. It went predictably downhill from there and I left a bit frustrated and without the inspection that I needed in order to register the bike.

I called the sheriff's office to confirm with them that turn signals were not required. They suggested trying another inspector so I traveled across the county to the county clerk's other office location. There the inspector was much more informed and gave me a passing inspection without any issues despite copious amounts of mud caked everywhere and a mostly-dead battery.

I was able to easily add the KTM to my existing motorcycle policy online without any roadblocks. My annual insurance premium actually decreased by about $50 with the addition of the bike.

Armed with a passing inspection and proof of insurance, getting the bike registered in Kentucky was as simple as handing the clerk the Colorado title, the inspector's report, and freshly-faxed proof of insurance. After handing over some hard-earned cash to cover the taxes and fees, I was able to walk out with some fresh plates. 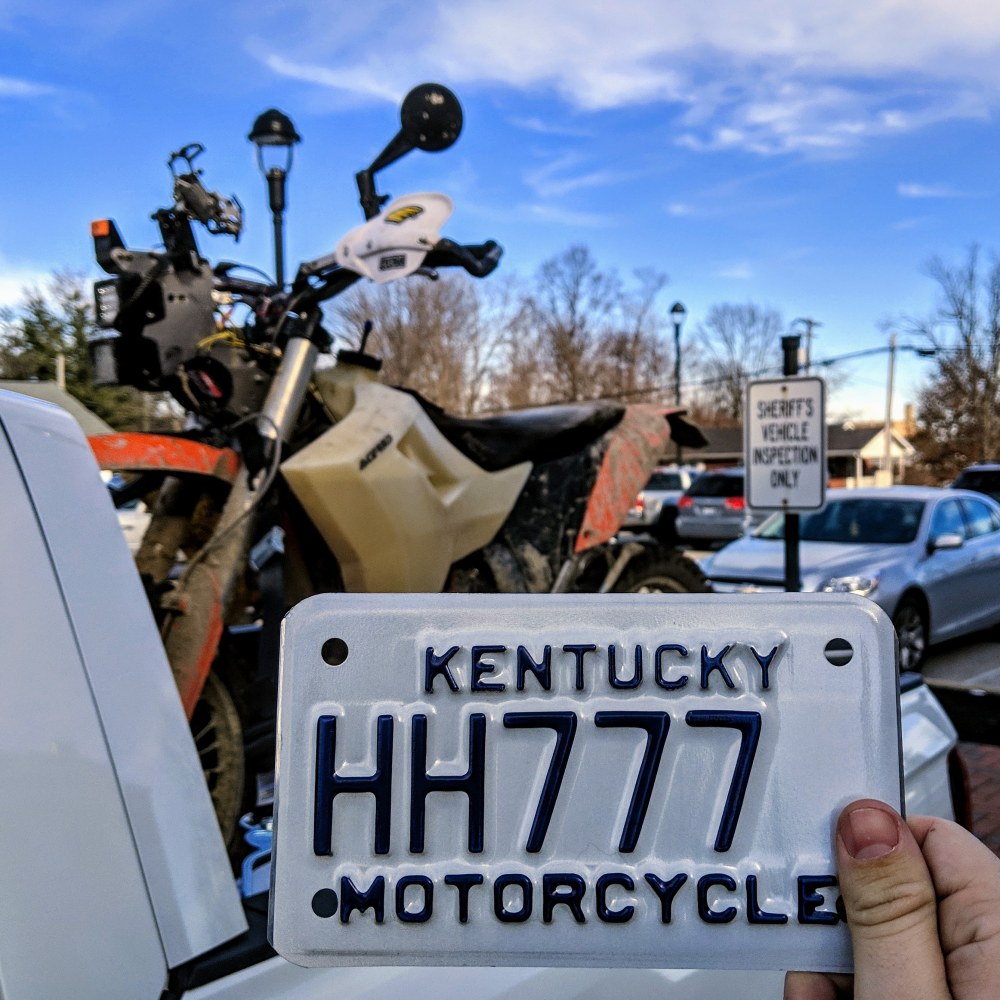