Due to concerns about the spread of COVID-19, the 2020 edition of the Desert RATS Classic is cancelled.

Problems solved. Well, some of them, at least.

Last Sunday, I took the bike out for a shakedown ride on some trails around Navajo Rocks. During the ride, I identified a list of things to address. I addressed some of the issues and went for another ride on it yesterday.

Here's where we stand:

I'm hoping to get out on this bike again tomorrow or Friday.

Well, I didn't die this time.

Yesterday, I finished reassembling the bicycle after powder coating; this afternoon I took it out for a shakedown ride around the 17-mile main loop at the Navajo Rocks area near Moab, Utah. 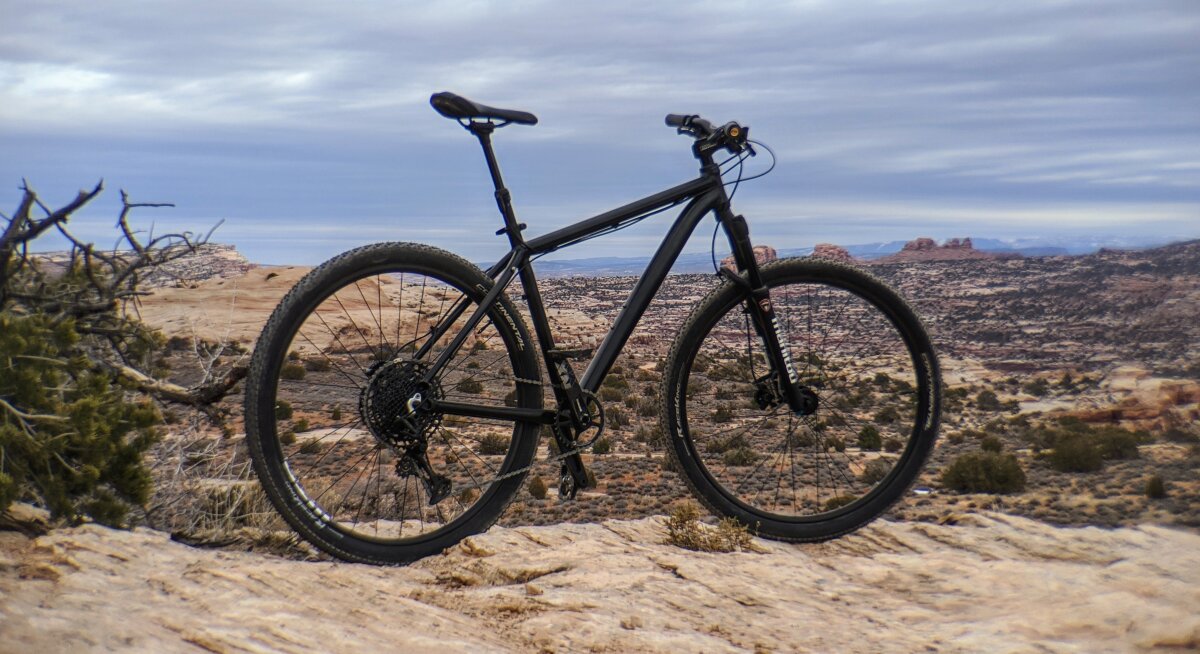 I'll try to address these issues in the next day or two and then give it another go.

Unlike Humpty Dumpty, it's put back together.

Yesterday, I got the frame back from the powder coating shop and I began reassembly by installing a new headset. Today, I reassembled the rest of the bike. Most of these components were already on the bike before powder-coating, so it all went back together without any trouble. 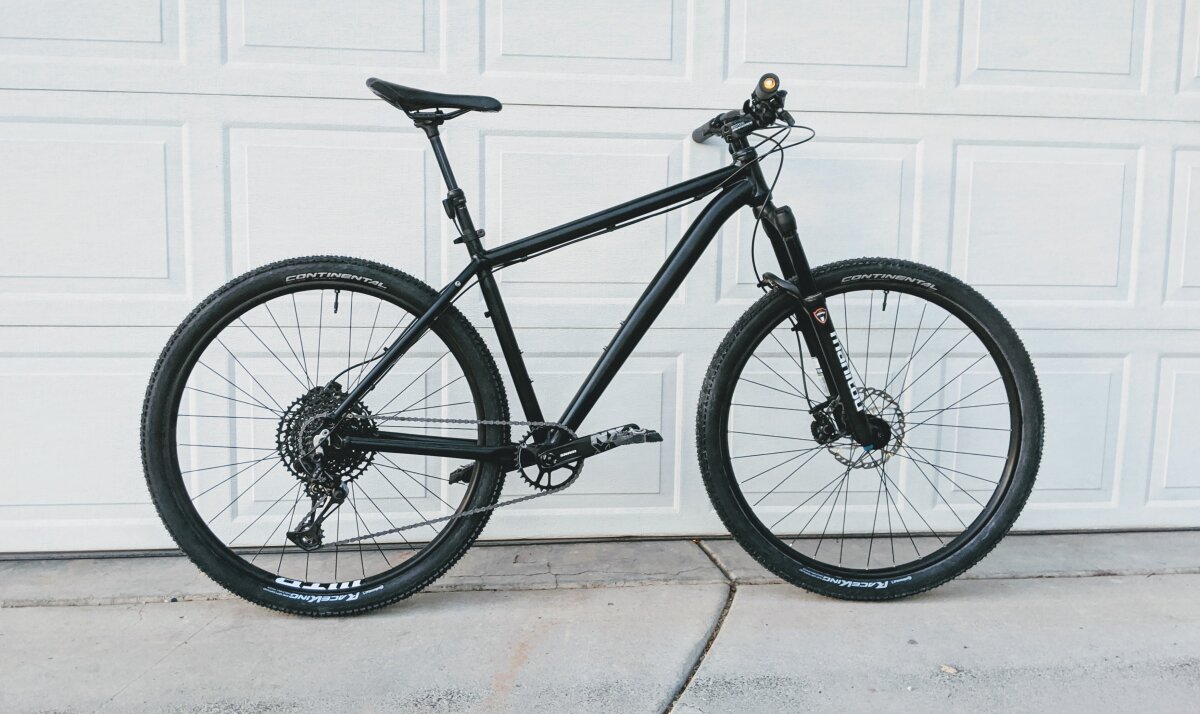 Here's a summary of the components I have on the bike at this time:

I've ridden the bike a lot with most of these components, but the handlebars and pedals are new—tomorrow afternoon I've got a ride in mind to see how everything feels.

As I wrote in my previous post, I'm having my bicycle frame refinished. This is purely cosmetic; the paint on the frame was pretty scratched up and worn through to the metal in a few places. Powder coating will give the frame a nice durable finish.

I dropped off the frame at Pro Powder Coating earlier this week to have it sandblasted and powder coated in satin black, and this afternoon I got a call that it was finished.

It came out great; the folks at Pro Powder Coating know what they're doing and it shows. Everything was masked properly and I didn't have to sand off anything or chase any threads. Overall, it was well worth the relatively low cost compared to the time and tedium it would take me to properly sand and repaint the frame myself. And I hate painting. 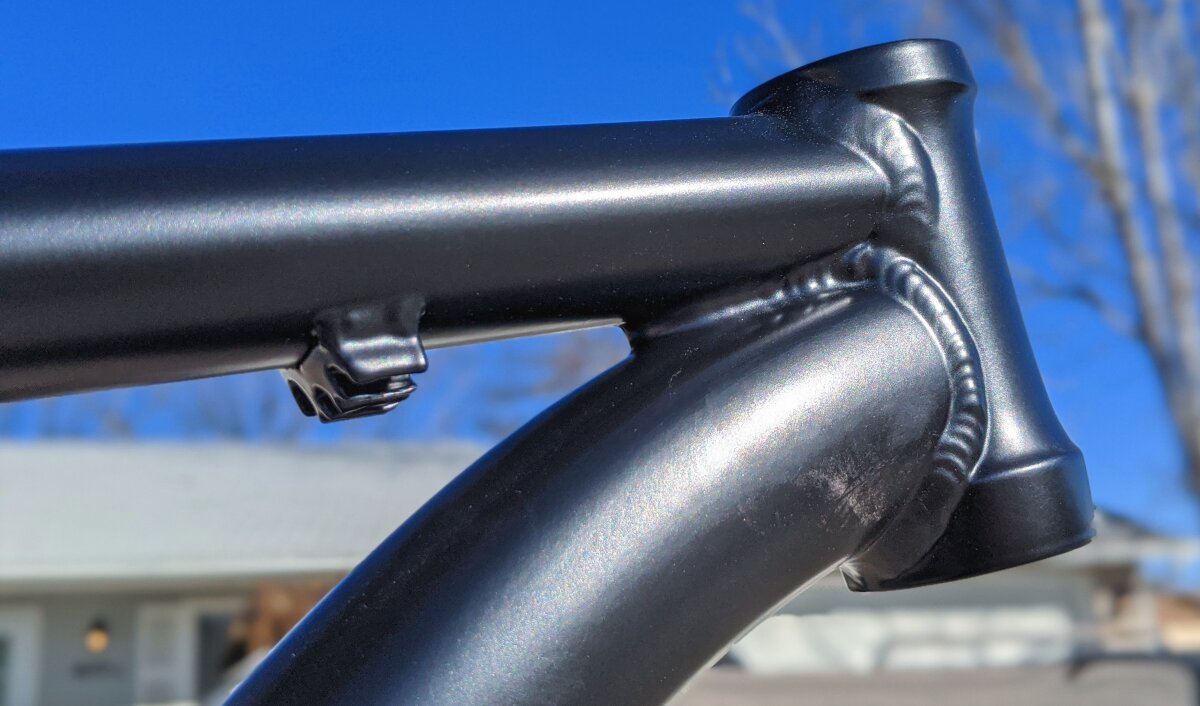 I also installed a new headset into the frame. The headset is basically the bearings that support the front fork securely in the frame. I chose to use a Cane Creek Viscoset headset.

The Viscoset provides a small amount of damping to steering inputs in order to help make the bike more stable, especially targeting uncontrolled oscillations, or "speed wobble", that can pop up at higher speeds. Although the Viscoset was originally designed for use with e-bikes, it turns out to be well-suited for all kinds of bikes. Bikepacking.com has a great in-depth review of the Viscoset.

Tomorrow I'll assemble the rest of the components onto the frame and get it ready for a nice Sunday afternoon ride.

For purely cosmetic reasons, I'm having the bike frame sandblasted and powder coated next week. But before it goes off to the shop, I'm reaming out the cable stops on the frame.

By reaming out the cable stops, I can use a continuous length of cable housing from the shifter to the derailleur. This will better keep the cable protected from grit and corrosion and the derailleur shifting precisely. I used a small power rotary tool, but some small files can also get the job done—the frame is made of aluminum.

Here you can see one of the enlarged cable stops and how the cable housing fits right through it now. 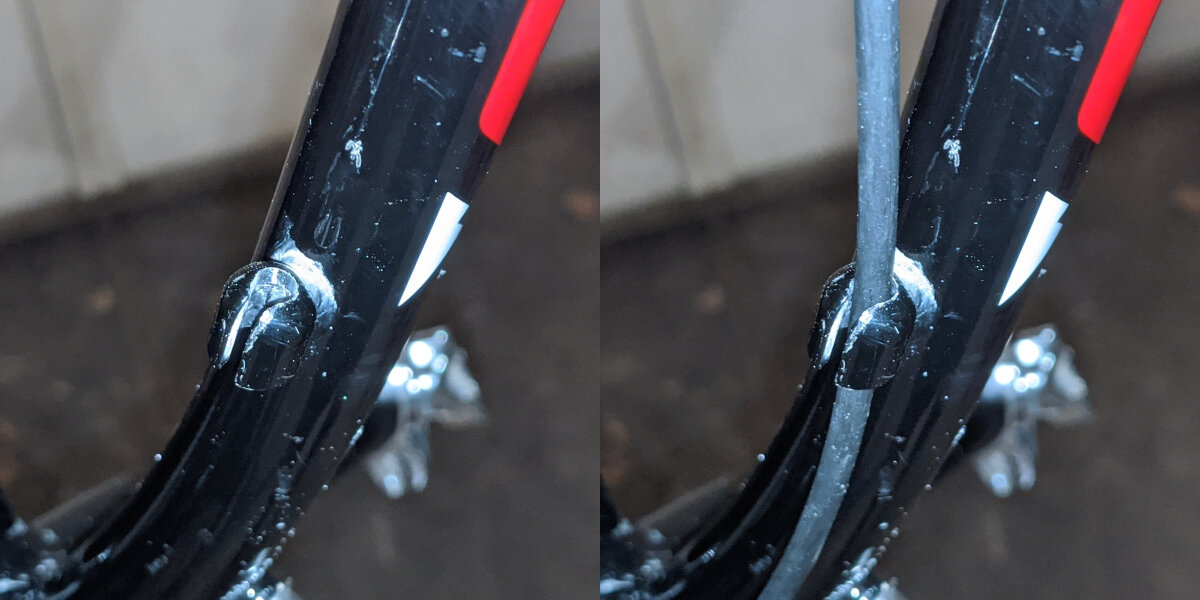 Now the frame is ready for powder coating.

What am I riding?

I purchased this Trek Marlin—an entry-level hardtail mountain bike—from my local bike shop back in 2013. A few years back, I replaced the flat handlebars with a cheap riser bar, and the long original stem with a short stem in order to make the bike more comfortable for me to ride around town. 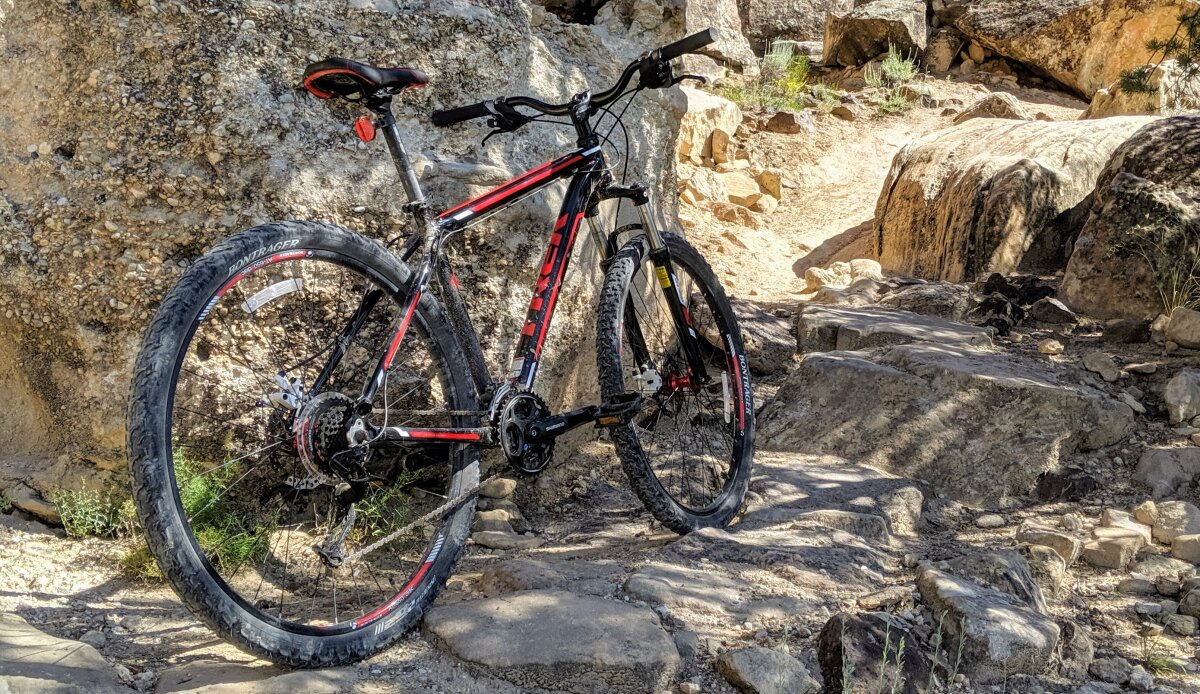 Since starting to ride regularly again last summer, I've replaced just about all of the components on the bike, upgrading to modern mountain bike components—the only original part left is the frame. I've mostly been riding this bike on the roads and bike paths with a set of gravel tires so far this winter. 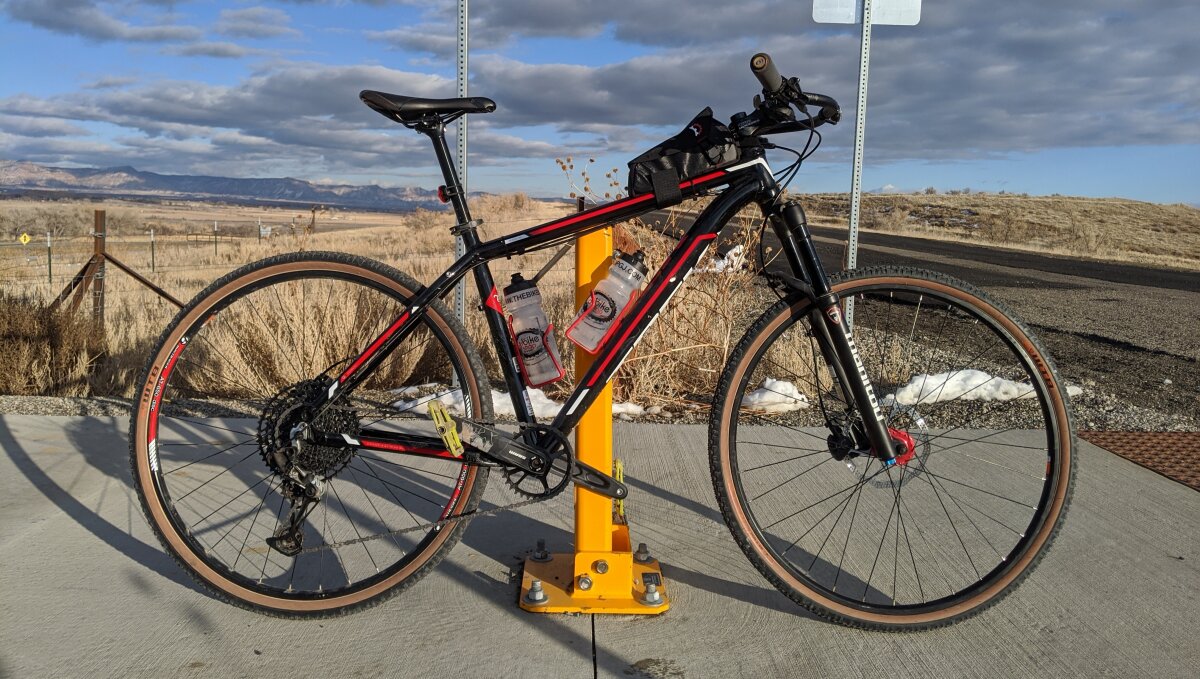 What have I gotten myself into?

I grew up riding a bicycle as a child. I vividly remember the first day I got my own 10-speed mountain bike for my birthday: it didn't go well. I ran into a big dog and went over the bars into the ditch on the side of the road. From that point, however, things improved.

I frequently rode my bike to school, and in the summer I would ride all over to meet up with my friends. We would take family day trips to some local rail trails to spend the day riding down by the ocean. But after high school, I stopped riding regularly.

Fast forward 17 years: last June my wife and I decided to take up mountain biking. Living in Grand Junction, Colorado, there are many trails nearby, so it was pretty easy to get out a few times a week and work up a sweat. Of course, summers are really hot, so I didn't start riding regularly until late September.

By now, both my fitness level and bike handling have improved a lot—easy when you start from zero—and I figured it was time to set a goal. So on May 9th, 2020, I'll be competing in the Desert RATS Classic mountain bike race.

The Desert RATS Classic is a 50 kilometer (31-mile) course run on some local roads and trails (primarily the Edge Loop and Sarlacc) that involves a lot of climbing. There's a 5-hour time limit, so I'll need to average about 6.2 mph in order to be an official finisher.

I've never been a particularly athletic person, so I have a lot of work to do. Over the next few months, I'll be posting about my bike setup, my training and fitness, and fun rides. 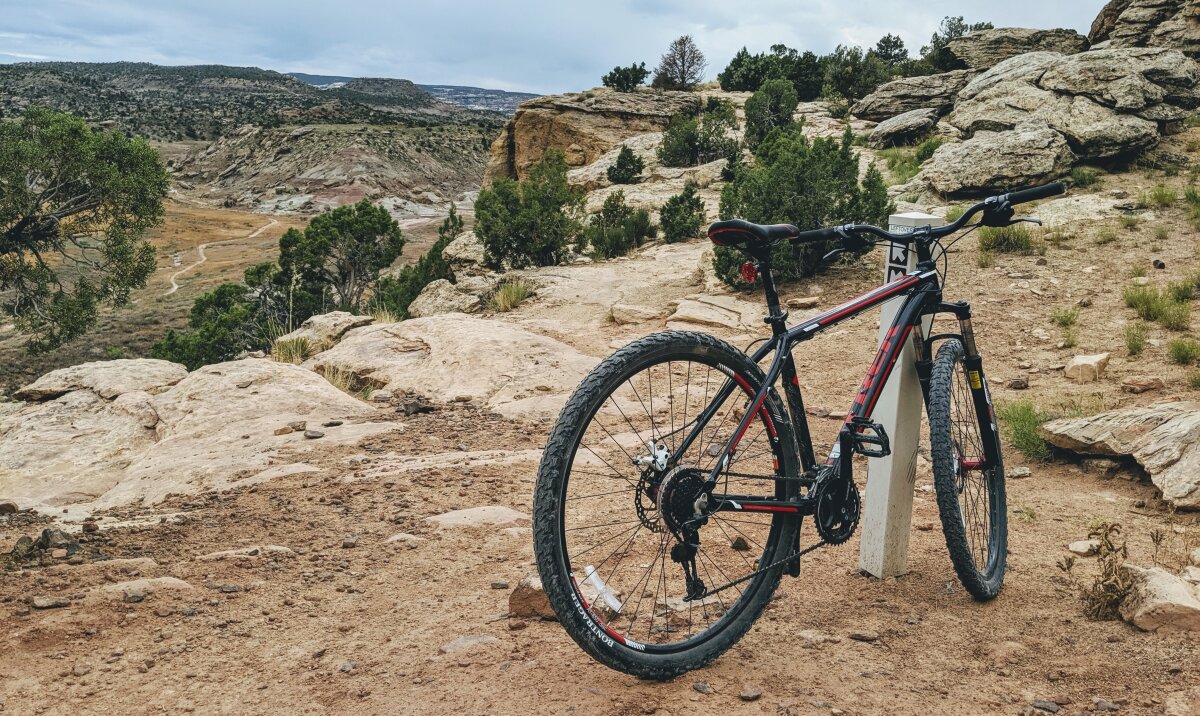