It's basically impossible to find an off-the-shelf first aid kit with just those items, so I purchased an inexpensive but relatively comprehensive home first aid kit. I pulled the required items out of the kit, along with a few more things: 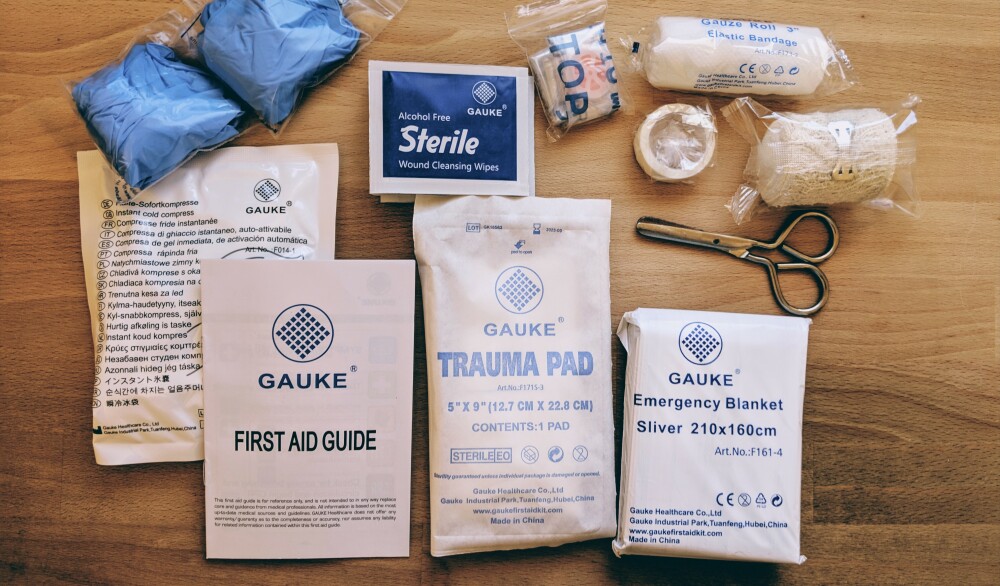 I've taken everything and packed it into a gallon-sized ziplock bag. Note that the scissors are quite sharp however they have blunt ends so I don't think they'll inadvertently puncture the bag or anything in it. This bag will go, along with a folding FMVSS #125 warning triangle and the required OK/help placard, into a small bag mounted on the back of the bike or into my hydration pack. I haven't figured out storage yet, but according to the rules, it can be either mounted to the bike or mounted to me—either is acceptable as long as it is easily accessible.

Generally I like to minimize what I'm carrying on my back, but I need to assess how things could mount to or fit on the bike—it might just make more sense to throw everything into my hydration pack. I'll write a post later on how I'm carrying the required equipment once I sort everything out.

It's important to be prepared, but here's hoping that I won't have to use anything in the first aid kit on myself or anyone else!

After talking to one of my friends who is a medical professional, I upgraded the scissors to a proper pair of trauma shears. They're inexpensive and far more versatile than the super basic scissors that were included with the home first aid kit. I also added an Israeli bandadge and SAM Splint. The whole kit is a little more bulky now, but still not much heavier.