The current tires on the KTM are fine for casual trail riding around here, but not really race-ready. There's a Bridgestone M403 on the front, a motocross tire which was discontinued a few years ago, and a Dunlop MX81 on the rear, which is a little newer but is showing some wear.

While they'd surely get me through the race, I like to stack the deck in my favor as much as is allowed and opted for some new shoes. Since most of the special sections of Sandblast are run on very sandy roads—as one should expect from the name—I went with a pair of Shinko 546 soft-intermediate terrain tires. 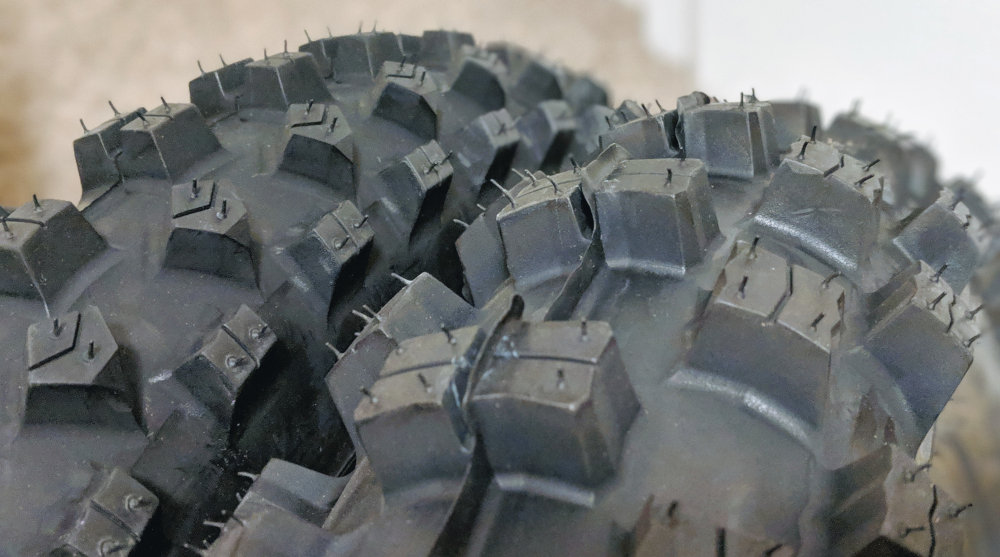 Being "soft-intermediate terrain" tires means that they're made from a harder rubber and with a wider-spaced tread pattern in order to provide good traction in softer terrain. The trade-off is reduced traction on pavement, which is acceptable given that the real racing primarily occurs on the soft stuff. I don't have any prior experience with this specific tire model, but they are inexpensive and seem to be pretty well-liked. Realistically, as long as there's air on the inside and some knobs on the outside, the tire isn't going to make or break the race for a novice competitor such as myself.

The rear tire is a 110/100-18 size, which is the widest variant that will fit my bike. Shinko do make a 120/100-19 but that's for the 19-inch rear wheels normally found on motocross bikes. Enduro bikes, like my bike, typically have an 18-inch rear wheel diameter. Normally I tend to run a wider tire, but I think the difference will be negligible, especially on the softer terrain.

The front tire is a 90/100-21 size, which is sometimes referred to as a "fatty" front tire. It's a size bigger than the usual 80/100-21 or 90/90-21 front tires, which raises the front end a hair, adds a little more front-end cushioning, and slightly changes the steering geometry. The steering geometry change tends to add a little bit of directional stability, which is always welcome in sand. (For what it's worth, I'm not running a hydraulic steering stabilizer on the bike.)

While normally I run with the front and rear tires each stuffed with a mousse instead of a tube so I don't have to worry about flats, the use of mousses is not allowed at Sandblast. Sad panda. I picked up a set of heavy-duty Kenda rubber tubes to keep the air where it's needed. I'll have spares at the truck so I can change if needed, but I'm not planning on any trailside tube patches during the race.

In the meantime, I'll keep running the old tires. I'll spoon the new ones on before I head down to Sandblast, but there's no reason to change them quite yet.